During her freshman year at the University of Alabama at Birmingham (UAB) in 2013, Supraja "Sippy" Sridhar quickly realized she could not use her large, mandatory meal plan completely. One day, Sippy's friend asked if Sippy would mind paying for her lunch. This friend worked a second job in order to pay for her meals on campus. Sippy gladly paid for her friend's meal for the rest of the academic year.

This experience led Sippy to wonder if other students shared her friend's predicament. Her research led her to the term "food insecurity". Students facing food insecurity have inconsistent access to food because of limited resources. Unfortunately, collegiate hunger is very common on campuses across the United States.

UAB maintained a food pantry in addition to providing students with counseling and advice for overcoming their situation. However, very few students knew about these helpful, free resources, so Sippy founded Donor to Diner (D2D) in order to increase awareness of this relatively unknown issue while expanding the resources available to help her peers.

D2D has collected donations through food drives to maintain UAB's food pantry, but D2D's "One Meal Initiative" program has made the greatest impact on combating student hunger on campus. The "One Meal Initiative" is a meal donation program that allows students to donate excess meals from their meal plans to benefit fellow students facing food insecurity.

After 2 years of attempting to initiate this program, Sippy successfully inagurated to "One Meal Initiative" in 2015 with the support of UAB administration and Sodexo. This program is a large-scale version of what Sippy did for her friend during her freshman year. The "One Meal Initiative" has become very popular and Sodexo's backing was publicly cited as a reason for its contract renewal in Spring 2016. 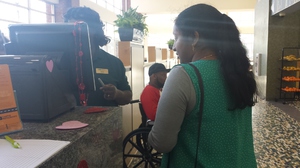 Local news coverage of Donor to Diner and the "One Meal Initiative" helped D2D advocate for hungry students. Articles and news clips about D2D reached students from universities in other regions of the country who wanted to help their peers in a similar way. Because of requests from some of these students, D2D is expanding to establish chapters in other universities.